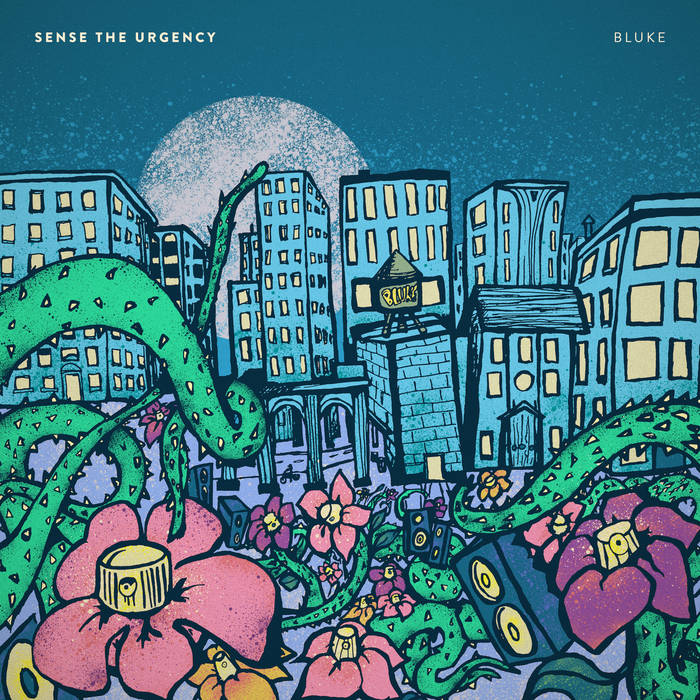 chef super smooth record! not a lot of alternative hip hop sounding this experimental/futurist and analog at the same time, and the rap scene could use more of that. big ups cuz.

Back in the early 2000s, Ninja Tune’s heyday, the unlikely duo of label mates BluRum13 (One Self) and Luke Vibert (Wagon Christ, Plug, Kerrier District, ...) quietly formed across genres and geography. Their first album, “Smell the Urgency,” was a playfully intellectual romp through the minds of two geniuses of rap and production respectfully. The album was shelved for reasons unknown, only to be resurrected by fans 13 years later and released on limited edition vinyl by Lille’s Besides Records. The re-release prompted a reunion, and just one year later, BLUKE returns with a second album even more revelatory than the first.

True to both artists’ extensive experience and discography, “Sense” showcases the depth of talent unique to each. The album is replete with expert sample-stitching, like the vintage video game sounds on Omnipotent or the whistling banjo duet on Happy Daze. From the chunky 70s bass lines of Gimme a Sign, to the rapid-fire scratches and litanies of Something Fresh (ft. DJ SPS), to the lazy quirk of Turninitup, BluRum and Vibert trap and entrance our senses, raising and respecting our consciousness along the way. Tempos rise and fall with precision, Blu flexes hard on shiners like Grind, with Vibert’s expert production laying a soaring foundation for Blu’s lightning-yet-laidback rhymes that you have to listen to again and again to fully extract their multilayered meaning. Most wonderfully, Vibert sets his whimsical side free again for “Sense”, giving BluRum the room to write Couldabin, a love song for lovers of artists, and even leave us with the sweet summer banger Slide By. As per the imperative of Machine Gums, with “Sense the Urgency” BLUKE leaves a legacy unmatched in hip hop to-date. So open your third eye, and raise your spirit in celebration of the 360 resurrection of real beats and rhymes.

Produced by Luke Vibert
Written and performed by BluRum13
Additional lyrics on Golden written by Echem Pahkwah and Gahd Indeed
Background vocals on Omnipotent by Oz and Biz
Background vocals on Turninitup by Recyte and Cicily
Trumpet on Couldabin by Ray Colom
Scratches on Something Fresh by DJ SPS
Mixed by Céline Frezza at Jarring Effects Studio in Lyon, France

BLUKE is the unexpected duo of BluRum13 and Luke Vibert. Their 2nd album features 20 tracks unleashing both artists' extensive expertise in layering and lyricism. The rhyme-sample wizardry of the "Sense" album ranges from violent urgency to lushly fat downtempo.
So set your alarm, and wake up to the 360 resurrection of real beats and rhymes. ... more

Bandcamp Daily  your guide to the world of Bandcamp